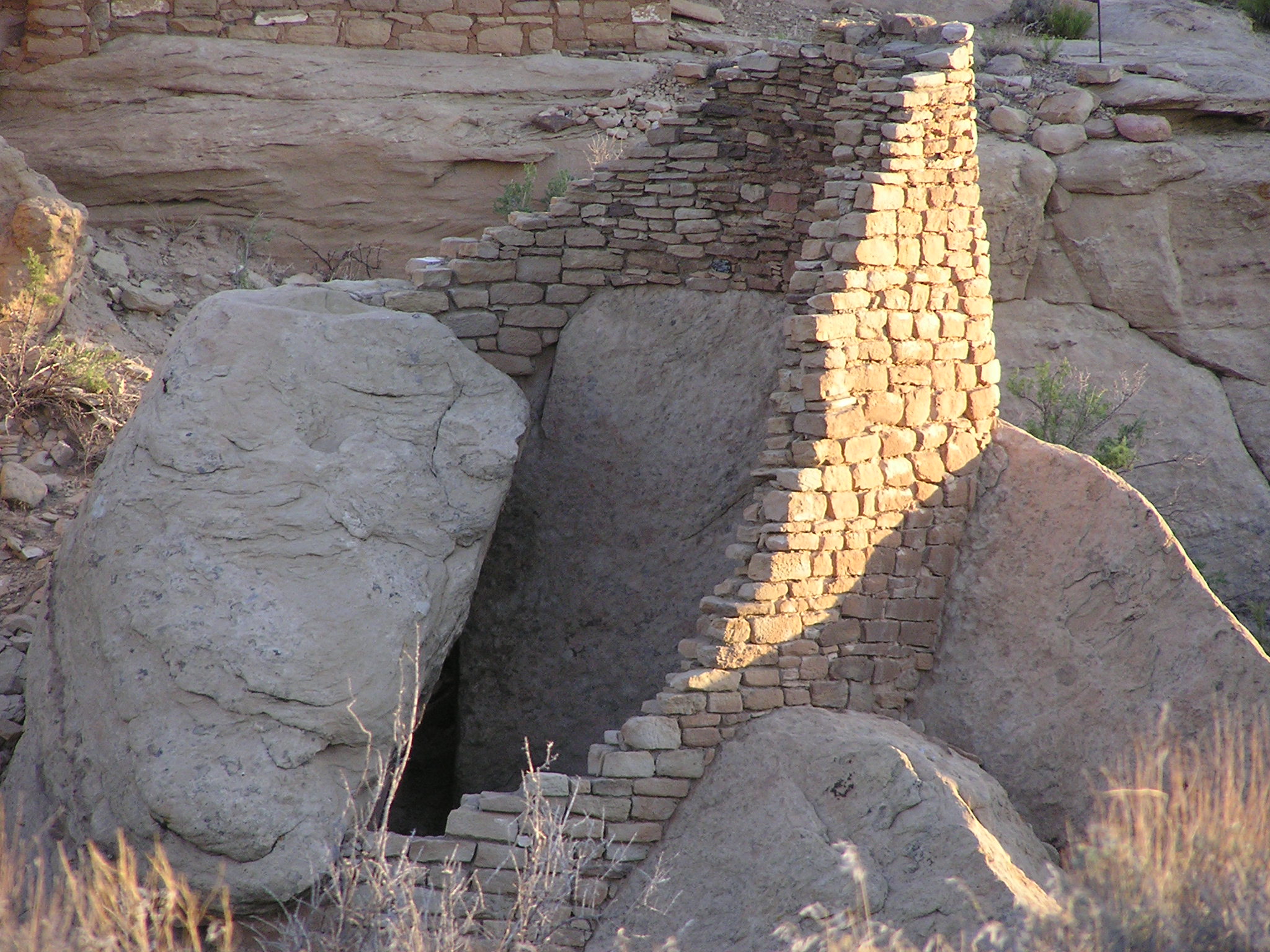 This theory isn’t new, that Chaco wasn’t permanently occupied. However, the study attempting to prove that is recent. I’m not qualified to dispute this, but I wonder how they can prove the conditions weren’t more suited to agriculture 1000 years ago. Less than 200 years areas near Chaco were lush grasslands. Also, why does it make more sense that large numbers of visitors could carry all the food they needed to Chaco for their visit. (If so, why not make them bring more than they needed, so as to feed locals?)

New research from a team headed by a University of Colorado scientist casts doubt on Chaco Canyonâ€™s status as a significant year round population center during the Anasazi era. Larry Benson, an adjunct curator at the CU Museum of Natural History, as well as a hydrologist and geochemist, led a team of researchers that published its findings about the settlementâ€™s food sources in the November 2019 edition of the Journal of Archaeological Science, a monthly, peer-reviewed academic journal.

Paul F. Reed, Preservation Archaeologist (December 17, 2019)â€”Recently, there has been some debate about the value of protecting a 10-mile zone around Chaco Culture National Historical Park (henceforth Chaco or Chaco Park) and two of its outlying communities. Some have suggested that a smaller zone of protection, perhaps 5 miles in radius, would provide sufficient protection for the ancient Chacoan-Puebloan communities that lie outside the Parkâ€™s boundary. This idea is mistaken. In this post, I will make the case for protecting the significant and fragile ancient communities that lie within 10 miles of Chacoâ€™s boundary.

Their work is part of Project Map, an effort to model ancient and historic monuments across the state. Chimney Rock is one of their first projects because of its archaeological ties to Chaco Canyon National Historic Park, and for decades researchers from CU Boulder have worked at the site, which was mainly inhabited between 925 and 1125.

â€œThis is one of the most important national monuments of the Chacoan culture in the state of Colorado,â€ Gutierrez said.

Here are two academic sites with information on Chaco Canyon.

BLM Defers on Fracking Leases near Chaco Canyon
Yesterday, the Bureau of Land Management deferred for the third time the sale of three oil and gas lease parcels and approximately 2,122 acres of federal mineral estate on Navajo allotment lands in the Greater Chaco region. A broad coalition of local and regional watchdog groups submitted comments opposing the lease sale for fracking near Chaco Canyon, a UNESCO World Heritage Site. The comments focused in part on the agencyâ€™s woefully insufficient management plan for the region, which treats the Greater Chacoâ€™s communities and landscapes as a sacrifice zone. BLMâ€™s deferral of these leases, for the third time, illustrates the need for the agency to complete its ongoing resource management plan amendment before continuing to lease and authorize the development of any additional public lands for oil and gas. http://bit.ly/1LSSdPZ â€“ Pagosa Daily Post

Researchers recently worked out carbon-14 dates on scarlet macaw skeletons, most from the great house of Pueblo Bonito. They found that macaws were present at least a century before archaeologists thoughtâ€”some as early as A.D. 900 to 975. The results from this direct dating method are considered more accurate than previous, relative dates.

Chaco was a central ceremonial place in the early Puebloan world, with a complex society and upper-crust elites. To archaeologists, the dates suggest that the elites, who controlled access to the highly prized macaws, were in power earlier than had previously been thought.

Thereâ€™s a massive increase in the amount of constructionâ€”about half of â€˜downtown Chacoâ€™ houses were built at the time the wood started coming from the Chuska Mountains,â€ Guiterman said. To read in-depth about the ancient Southwest, go to “On the Trail of the Mimbres.”

Iâ€™ve read before that the Chuska mountains were a source of Chacoâ€™s wood. Distance isnâ€™t the only issue considering that the Anasazi didnâ€™t have wheels. Chimney Rock to the north is said to have provided wood from the surrounding mountains in the South San Juans. Chimney Rock is over 150 miles from Chaco by road; surely more than 50 miles away by any other route.

Looking at the map below, one has to wonder if wood came from the area around Mount Taylor, north of Grants (southeast of Chaco & next to Zuni), or from Jemez (due east of Chaco). Again, distance isnâ€™t the only issue.

According to the universityâ€™s Laboratory of Tree-Ring Research, most of the wood for the building projects in Chacoâ€™s arid setting came from the Zuni Mountains before the year 1020. That mountain range is about 50 miles south of Chaco and located southeast of Gallup.

However, the researchers say the Chuska Mountains became the main wood source became by 1060. The Chuskas are located about 50 miles to the west of Chaco.

Chaco is a World Heritage site. The area was considered a ceremonial and economic center for the ancestors of many Native American tribes in the region.

Our new Land Commissioner is likely to regard mineral extraction as more important than Chaco. Keep a sharp eye out and raise Hell over every threat to this treasure.

I like to drive to Chaco by going north out of Grants via Milan. The lower portion of this route is marred by old radioactive tailing ponds. However, my last trip a year or more ago I passed through a hellish landscape of smoke and dust as countless large machines ripped up the land. Iâ€™d like to see that on the 10 oâ€™clock news and the front of the newspaper. Instead, this destruction goes on just out of sight of most travelers. Donâ€™t let it get an inch closer to Chaco.

In some ways, it still looks like it did centuries ago.

â€œRight now, you can stand at Pueblo Alto, look north and see a landscape that is substantially the same as what the Chacoans saw,â€ said Barbara West, former superintendent of the Chaco Culture National Historical Park.

But that could be changing.

If we left it up to the market, there would be an oil well in the middle of Rinconada. The profiteers donâ€™t care what they destroy for money. Look at the stripmining going on just barely south of Chaco and the toxic waste closer to Grants.

â€œWeâ€™re not against oil and gas drilling [mjh: I AM!], but it has to be done properly,â€ said Bruce Gordon, president of EcoFLight, during a flight over the park and its surroundings on Monday morning.

The Partnership for Responsible Business and the New Mexico Green Chamber of Commerce organized the flyover tour that included one tribal leader and a handful of journalists.

â€œThe biggest thing is the landscape,â€ said Keenan King, who works with the Partnership for Responsible Business.

Barbara West, a former Chaco Canyon park superintendent, and Mike Eisenfeld, with the San Juan Citizens Alliance, flew above the park on Sunday evening. They were interviewed after the flight in Farmington on Monday.

The group agreed that the BLM needed to create a â€œMaster Leasing Planâ€ that would take into consideration keeping the park largely unspoiled for visitors.

â€œWe donâ€™t want Chaco to be an island surrounded by hundreds of wells,â€ said Paul Reed, an archeologist with Archeology Southwest and the author of â€œThe Puebloan Society of Chaco Canyon.â€