The Petrified Forest National Park has announced that 14,650 acres of park expansion lands are now open.

The lands were acquired by the park from the Bureau of Land Management (4,800 acres) and by purchases from willing private sellers (9,850 acres) since the Petrified Forest Expansion Act was passed in 2004.

One of the areas newly opened is Billings Gap, which is a route between mesas that contains fossil remains of approximately 220-million-year-old clam beds. The park staff have already found interesting paleontological finds in this area, which can be accessed on foot. There are no established trails in this wide, open terrain but route information and maps are available on the parkâ€™s website (www.nps.gov/pefo) or at the parkâ€™s visitor centers.

By Journal and wire reports | 9 hours ago

On Monday, Martin Luther King Jr. Day, visitors can enter Bandelier National Monument, as well as other national parks and monuments throughout the United States, free of charge.

Mondayâ€™s holiday is the first of nine days in 2014 when all National Park Service sites will open their gates to visitors without charging entrance fees.

We wiped out the elk and wolves in this area. Then we brought back elk. Time to let the wolves restore balance, just as they have done in Yellowstone.

Elk, once a rare sight at the national park, now regularly jam up the park’s roads, graze on hotel lawns and aren’t too shy about displaying their power, provoked or not. They’ve broken bones and caused eye injuries in the most serious circumstances, and give chase to the unsuspecting. â€¦

Elk brought in by train from Yellowstone National Park helped re-establish the Arizona populations after the state’s native elk became extinct around 1900.

They’re now too close to the Grand Canyon’s most popular areas for comfort. The Grand Canyon Wolf Recovery Project is excited to host our second wolf advocacy campaign relay hike from July to October 2013 that will follow a natural dispersal corridor, connecting the Blue Range Wolf Recovery Area (where Mexican gray wolves currently live) to the South Rim of the Grand Canyon (where we are advocating for their return). Mexican wolves are capable of traversing hundreds of miles, and need room to roam in order to establish a metapopulation structure to preserve remaining genetic diversity.

Follow the link for the latest versions of these maps.. mjh The Phoenix Haboob of July 5th, 2011 from Mike Olbinski on Vimeo.

Started on May 29, the Wallow Fire, located near the Arizona and New Mexico border, had already burned 389,000 acres when Landsat captured a stunning aerial image of it on June 7. Smoke from the fire has affected air quality as far north as Wyoming and as far east as Georgia. The U.S. Geological Survey and NASA cooperate closely in managing the Landsat program and we have them to thank for images such as this.

To view it yourself in Google Earth, simply download this KML file.

As usual, Bostonâ€™s The Big Picture has some great photos, although I hate scrolling to see them. 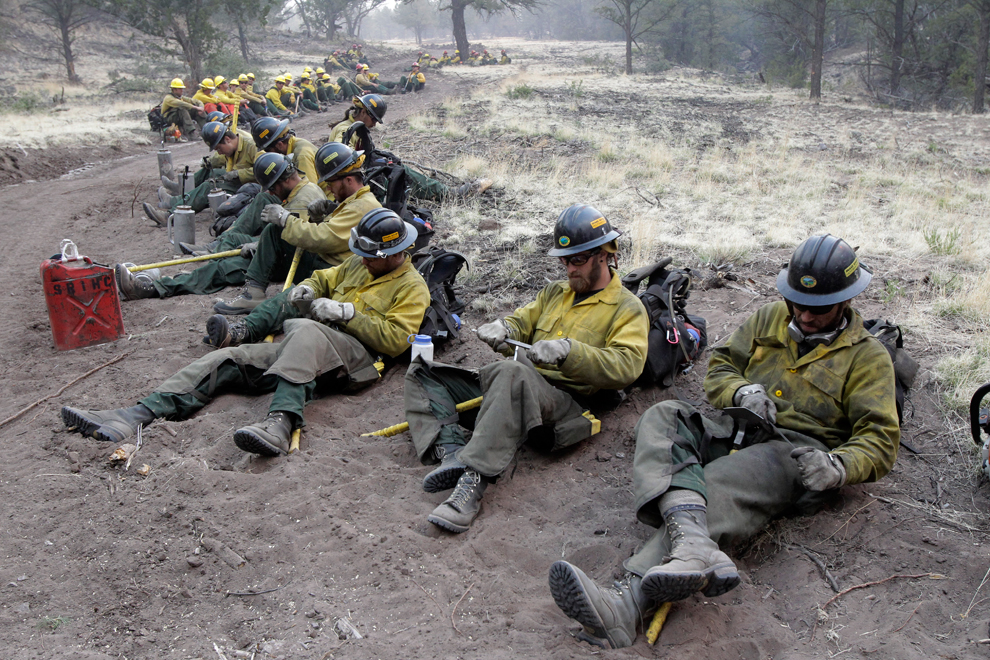 2 Fire crew members sharpen their tools as they prepare for a back burn operation in Eagar, Arizona. A raging forest fire in eastern Arizona has scorched an area the size of Phoenix, threatening thousands of residents and emptying towns as the flames raced toward New Mexico, June 8, 2011. (Jae C. Hong/Associated Press) #

Three images taken from space of the Wallow North fire in Arizona in June 2011 show the fierce magnitude of this event.

Yes, at least in the West, home to most of the nation’s largest wildfires.

Ash from this fire covered my chair in Albuquerque.

The San Francisco Volcanic Field lies not near the city of the same name but in northern Arizona. Covering 1,800 square miles (roughly 4,700 square kilometers), the volcanic field consists of volcanoes and lava flows, including SP Crater. The Advanced Land Imager (ALI) on NASAâ€™s Earth Observing-1 (EO-1) satellite captured this natural-color image on April 17, 2010.

History of the Sinagua written in the red rocks of ruins

Palatki Red Cliffs Heritage Site is a nice place to explore when the sun is out and the weather is nice. It might be even better on a stormy day.

Because of this, Palatki (a Hopi word meaning "red house") is fairly well-preserved, although it never has been rebuilt and the site hasn’t been excavated, Green said. â€¦

The hike to the ruin is about a quarter-mile. Some might find it challenging, but anyone in good physical condition should have no trouble.

To the left of the visitor center, another trail, also about a quarter-mile and with a gentle grade, leads to an overhang containing rock art and the remains of an old homestead.

About 2.5 miles down the road from Palatki is another ruin, Honanki. The site is watched over by Pink Jeep Tours Co., which signs in visitors and take clients to the ruin, pointing to various symbols on the rock.

Honanki has more walls standing than Palatki does, and it may have been one of the largest Sinagua population centers in the Verde Valley. Archaeologists believe it was one of the places the Sinagua went after they left Palatki.

There were more than 60 rooms on the ground floor, perhaps as many as 72 when additional stories are taken into account. The site was abandoned around 1300.

Some of the rock art is obvious; some of it is visible only in the right light. Archaeologists say they find something new every time they look at the site.

History of the Sinagua written in the red rocks of ruins

Read Adventurous Wenchâ€™s brief account of Tuzigoot, in Arizona south of Flagstaff and not far from Montezumaâ€™s Well and Castle — worth a visit.

Not far from Sedona, Arizona, lie the ruins of Tuzigoot, an ancient Sinagua town that was abandoned centuries ago.

[updated 10/28/08]
This marsh and park are in sight of Tuzigoot but miles away by road.

Results of poll on feelings about wolves in NM, AZ – Las Cruces Sun-News

By The Associated Press

ALBUQUERQUEâ€”A look at results from a poll of 1,000 residents of New Mexico and Arizona, half in each state, about the U.S. Fish and Wildlife Service’s 10-year-old program to reintroduce the Mexican gray wolf on public lands in the two states.

â€”Sixty percent of Arizonans and half of the New Mexicans surveyed want ranchers to be required to remove or render inedible the carcasses of cattle that die of non-wolf causesâ€”something environmental groups have pushed for.

â€”Fifty-one percent of Arizonans and 48 percent of New Mexicans support reimbursing ranchers who volunteer to give up their grazing leases.

A portion of the poll calling for respondants to state the first thing that came to mind when thinking about wolves found:

Information from poll done in April and May by Research & Polling Inc. of Albuquerque. The poll has a margin of error of plus or minus 4.4 percentage points.

Results of poll on feelings about wolves in NM, AZ – Las Cruces Sun-News

The Arizona Trail is a continuous, 800+ mile diverse and scenic trail across Arizona from Mexico to Utah. It links deserts, mountains, canyons, communities and people. Currently 94% of the trail is complete.

The Sonoran Desert Knowledge Exchange (SDKE) is a collaborative initiative led by the UA Libraries that seeks to bring together individuals and organizations who have information, services and other resources that can contribute to increased awareness, research and preservation of the Sonoran Desert.